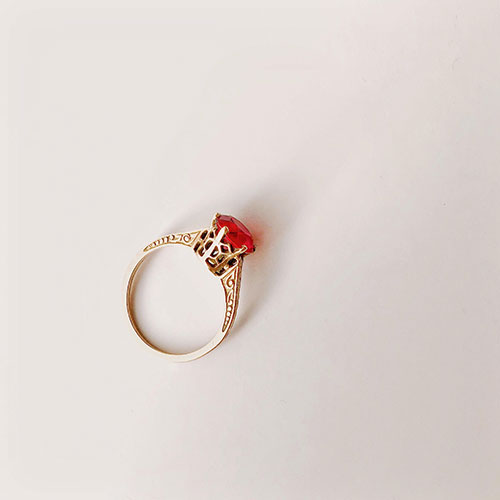 One day in 1923, a father gave his daughter Dolly a ruby ring for her sixteenth birthday.

They were country folks without a lot of money so the ring wasn’t fancy, but it was pretty. In fact, it was the nicest jewelry Dolly had ever owned and she loved it. As time went by her fingers grew and changed and eventually she stopped wearing the ring. But she held onto it, safely tucked into a drawer, until one day in 1990 when she decided to give it to her 13-year-old great granddaughter, Melody.

Melody was enthralled by the ring, and to her young teenage eyes it was just about the most beautiful thing she had ever seen. She slipped the ring onto her finger and rarely took it off for the next twenty years. Wearing it felt like a special privilege, and in a moment when most kids aspire to sameness and belonging, she imagined it was a tiny thing that set her apart. It became a keystone of her identity, a little flash in the corner of her eye reminding her of a secret part of herself, something constant even as she grew, evolved, and changed from a young girl into a young woman, and then into a mother.

When she started blogging and designing fabric in 2009, she used the name Ruby Star in honor of the ring. Ruby Star was an alter ego of sorts, the imaginary future of the girl who originally wore the ring: the curious, confident, successful woman she wanted to be. As she slowly embodied more and more of this alter ego herself, Melody eventually put the name - and the ring - away.

Fast forward to the present, and to a new chapter of re-anchoring and rebuilding. For Melody, starting Ruby Star Society has been about looking inward and asking a million questions, about holding onto a dream she wasn’t finished chasing. It made sense to name this newest venture as a tribute to the future that she now envisions: one of sisterhood, collaboration, wisdom, courage, and strength; a future that holds that secret sense of delight Melody felt when she originally wore Dolly’s ring.

And now, the ring is again safely tucked into a drawer, unworn. But it continues its steady journey through time, connected to the past and reaching forward into the future, waiting patiently for Melody’s own daughter to wear it someday.